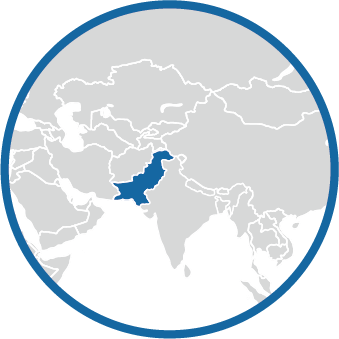 Sustained donor funding in the last decade has facilitated health systems strengthening and improved TB case notifications in Karachi, the South Asian megacity of over 20 million people. From 2011 to 2017, support from the TB REACH Initiative for active case finding increased detections, particularly for pediatric and drug susceptible (DS) TB. This was done through a variety of innovative approaches led by the private and not-for-profit sector, including household contact tracing by community health workers, multi-media communication campaigns and service delivery centers with free-of-charge TB diagnostics and treatment for the working poor.

Innovation in the Karachi TB program has centered around cross-sectoral linkages and encouraging local ownership and community participation. A prominent example of this approach is when the Indus Health Network, a charity-based health network and leading TB treatment center in Pakistan, partnered with local not-for-profit Interactive Research and Development (IRD) in 2011 to employ an incentive-based active case finding approach to screen 1.2 million people for TB. This “mobile-money” scheme relied on pre-programmed electronic scorecards on screeners’ mobile phones to facilitate active case finding and detected twice as many TB cases in its catchment area as compared to the previous year. It encouraged Karachi’s untapped private sector to offer progressive financial incentives to providers, health workers and community screeners when they detected and referred suspected TB cases. It also ensured adherence and successful completion of treatment.

Two service delivery grants (2016 to 2017 and 2018 to 2020) awarded to Indus Health Network from the Global Fund to Fight AIDS, TB and Malaria with IRD as the technical partner expedited the scale-up of interventions under the Zero TB Karachi initiative and aimed to utilize comprehensive TB control measures (like “search-treat-prevent”) to bring about rapid declines in incidence rates. These initiatives built on previous public sector efforts and helped contribute to a 60 percent increase in TB detection rates between 2010 and 2018, and a 39 percent increase between 2015 and 2017-2018.

“The quality and intensity of interventions in TB programs are directly correlated with the investments made in searching for, treating and preventing TB. In Karachi, between 2010 and 2019, investments by Stop TB’s TB REACH Initiative, UNITAID, Global Fund and, to a lesser extent, the government and private donors can be demonstratively linked to increasing notifications and improved treatment outcomes in the initial years, followed by declines in TB and DR-TB notifications.”

In a populous city known for its fragmented and uncoordinated health infrastructure, Zero TB Karachi introduced mechanisms for patient monitoring and cross-sectoral collaboration. A centralized database housed electronic medical records to identify patients regardless of whether they sought care in the public, private or not-for-profit sector. A linked call-center followed up with cases of treatment delay, disruption or other concerns. Mobile X-ray digital vans were deployed to proactively screen asymptomatic individuals in high-risk areas – such as hospital outpatient departments, prisons and factories – and were a source of heightened visibility and publicity for efforts to end TB. Integrated into these efforts were the pilot roll out of 3HP, a TB prevention treatment, as well as access to new drugs for drug-resistant TB patients.

Zero TB Karachi’s youth engagement scheme, dubbed “Kiran Sitara,” trained and mobilized 40,000 school girls to create referral networks and run mobile radiology camps as part of a concerted effort to increase the uptake of TB diagnostics and treatment in women in Karachi’s low-income and socially-conservative settings. Adolescent girls and young women constitute the highest TB prevalence population in Pakistan and the Kiran Sitaras were successful in engaging an overwhelming majority of women (over 80 percent) in the mobile radiology camps they organized and studies are underway to evaluate their impact.

Building on the government-led scale-up of pediatric TB interventions in 2013, Zero TB Karachi boosted pediatric TB notifications by more than 600 percent from 2010. This was accomplished by strengthening public sector hospitals and training healthcare providers to accurately detect and diagnose pediatric TB.

Consistent with the envisioned impact of the comprehensive “search-treat-prevent” strategy, latest estimates from Karachi show a seven percent decline in all forms of TB and a 28 percent decrease in DR-TB notifications from 2017/18 to 2019. The evidence suggests that large-scale active case finding combined with X-ray screening sustained for an extended period of time has resulted in reduced TB transmission and decreased incidence in the city.