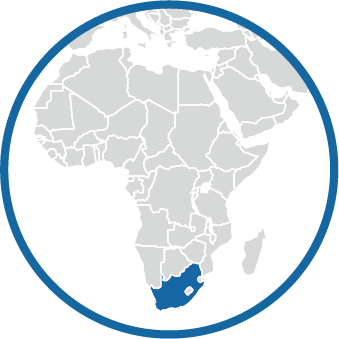 In 2009, the number of active TB infections in South Africa reached a ten-year peak, with 636,000 people developing the disease. But during the last decade, the country made fighting TB – the leading cause of death in South Africa – a political priority, scaling up innovative diagnostic tools and drugs while also investing in community-based treatment programs across the country.

This approach increased TB case notifications and contributed to the downward trend in incidence rates. In 2011, South Africa launched a multifaceted TB screening program. This included household contact tracing, HIV counselling and testing campaigns, community mobilization, door-to-door enquiry in areas with a high burden of smear-positive TB and the screening of high-risk populations. As part of this comprehensive screening program, the country worked to provide every person who needed a TB test with state-of-the-art molecular GeneXpert technology, which made TB test results available in two hours rather than three weeks. This turning point was due to bold leadership and a strong lab network. South Africa was one of the first countries to scale the use of GeneXpert technology.

The government was also ahead of the curve in transforming how people were tested and treated for multi-drug resistant (MDR) TB. In 2011, with support from the Global Fund to Fight AIDS, Tuberculosis and Malaria, South Africa created community-based treatment centers in all nine provinces to replace centralized hospital-based care, leading to a significant increase in the number of people receiving treatment. Additionally, the introduction of GenXpert made it possible to test for resistance to rifampicin – a drug routinely used to treat TB – in just a few minutes.

In 2011, South Africa rolled out GeneXpert technology, which made TB test results available in 2 hours rather than 3 weeks

In 2014, South Africa was the first country to rigorously introduce the oral drug bedaquiline to treat MDR-TB, setting the stage for country- and world-wide replacement of injectables with bedaquiline. Up until that point, people with MDR-TB endured months of painful injections that could cause deafness and other severe side effects. South Africa helped build the evidence for the World Health Organization to change their recommended treatments for MDR-TB. In 2018, the government negotiated a lower price for bedaquiline and made it available to all MDR-TB patients.

South Africa also worked aggressively to combat TB among people living with HIV – a high risk group – achieving high coverage of antiretroviral therapy (ART). Co-infections of both HIV and TB were nearly halved between 2010 and 2018. The government made numerous changes and interventions, including scaling up access to HIV testing and treatment, recommending that all people living with HIV begin TB preventative therapy (TPT) – medications that can prevent TB – and training community health workers to conduct both HIV testing and TB screening. Contact tracing and household screenings of those living with TB patients were also put in place to find more cases in the community and to link them to GeneXpert diagnosis and treatment.

South Africa was at the forefront of scaling up yet another innovation with the TB LAM test. This test – the tuberculosis lipoarabinomannan antigen test – is the first point-of-care, urine-based test for TB, and has been proven to reduce mortality by rapidly detecting TB in people with AIDS and enabling TB treatment to start earlier. The Ministry of Health piloted this test in 2017 in hospital settings, and in 2018 began a national scale up, thus improving early diagnosis of TB in people with advanced HIV and saving lives.

GeneXpert: A small machine (about the size of a coffeemaker) that works on a molecular level to rapidly identify TB and MDR-TB bacteria. It uses technology that is faster and more sensitive than traditional TB tests and can detect resistance to the most powerful first-line drugs.